Clearly this poll is not exactly a scientific indication of anything other than we all like Terriers. Unlike most polls the results really weren't the point, they were more of an outlet for we proud few Terriers fans to show a little unity. But there are a few things we can take away from this.

Typically when I post a poll I can expect anywhere from 10-30 responses. This poll received well over 100 responses. In fact I have never had a poll receive more votes than this other than several I put up during the final season of Lost.

From that I feel it is safe to say that this show has a rabid audience. And I also would venture a guess that perhaps these magic Nielsen numbers are nowhere near as accurate as they would have us believe.

How can a show that is supposedly watched by so few people have such a huge following? This isn't like a network show where bad ratings consist of a still sizeable five million people. According to Nielsen ratings Terriers is doing 725,000 viewers on a good week.

Maybe I watched too much Rubicon, but something just doesn't add up here. Be that as it may, lets make sure we all watch Terriers tonight live and do whatever we can as fans to make sure FX gives this magnificent show a second season.

(If you are feeling really motivated it is never too early to start the email campaign and send a Terriers love letter to user@fxnetworks.com. Keep it respectful and positive and we may even warm the hearts of those executives, or at least the intern who has to sift through those emails)
Posted by Ike Diamonds at 5:25 AM 0 comments

I guess after stealing thirteen colonies from Jolly Old taking a TV show should be no big deal. But when that show happens to be Top Gear, arguably the coolest show ever, it just doesn't sit right.

Despite my months of trepidation the American clone was far better than I expected. The challenges were fantastic and very much in the spirit of the original show. They wisely have decided to use the same visual style as the original as well.

Unfortunately, the magic of Top Gear is all in the hosts. With the exception of Adam Ferrara the Yanks really fell flat for me. Tanner Faost seems to have there personality of vanilla ice cream, which I can live with since he brings other things to the table like professional driving experience. Rutledge Wood on the other hand really brought nothing to the table. He simply was not funny, and without humor Top Gear is just another car show. And as someone who doesn't even know where the Speed Channel is on my cable box I hope they find the funny.
Posted by Ike Diamonds at 2:06 PM 0 comments

I am often suspicious of the Nielsen Rating system. According to the Neilsen ratings Terriers is a huge flop. Yet nearly every person I talk to is watching the show. I am just curious where the disconnect comes in. I would love to know you if you are watching or not.

Most Random Review Ever: Jeremiah 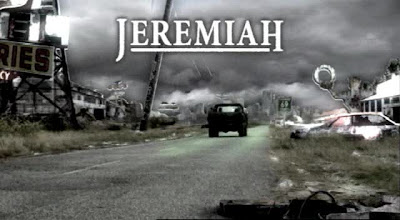 I like to think I provide a service here at DVR Assassin. And what could be of more help to the consumer than reviewing a 2003-2004 Showtime series that no one watched. In fact you can't even buy season two on DVD here in America (it is however available on Netflix Instantly).

If you've ever sat through something that you know you should hate and come out loving it that is Jeremiah for me. The action scenes are as clumsy as the worst Land Of The Lost episode. CGI is used in its most awkward fashion. And the dialogue can be very melodramatic at times. Good stuff right?

Jeremiah takes place in post-apocalyptic America, fifteen years after a disease has wiped out anyone over the age of thirteen. Despite what you might expect Pokemon cults have not taken over the world. Just good old-fashioned Mad Max style thieves and maurauders.

As the series develops you find out the evil government and military have survived in some base called Valhalla Sector and are, YOU GUESSED IT, plotting world domination. Or at least continental domination. Not quite the same ring to it though, so lets just go with world domination.

So why do I like this show so much? Theo Huxtable. Apparently after Malcolm and Eddie was canceled Theo hit the Mark McGwire workout/supplement plan. He is a monster now. And as an added bonus he uses his cable platform to drop motherfucker after motherfucker. And trust me, seeing Theo Huxtable saying Motherfucker is as funny as it gets.

If I wanted to describe this show in one tagline it would be: Post-Apocalyptic Series For Dungeons And Dragons Nerds. Trust me, sounds awfull;y specific but it fits. Just watch the intro below. It is lousy with flute, I can just see Gryffdor the Level 12 Dwarf dancing around the campfire to this thing. And if that isn't enough the characters on this show fucking love trench coats. I rest my case.

Posted by Ike Diamonds at 9:27 AM 0 comments

Sadly it seems my offer to the President of AMC wash his Bentley every weekend has fallen on deaf ears. AMC has canceled its best show, Rubicon, after just one amazing season. I knew I should have offered to clean his gutters too...

Hopefully, the talk of DirecTV pulling a Friday Night Lights for Rubicon is more than idle chatter. If not I think Rubicon is a guaranteed first ballot member in the Deadwood Hall Of Fame. I just wish I had some idea what the hell else people were watching before Mad Men on Sundays.
Posted by Ike Diamonds at 2:47 PM 0 comments 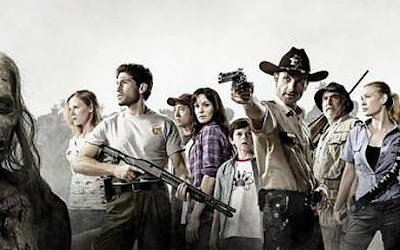 What if I told you that AMC was going to be showing one of the best zombie movies ever on a weekly basis? Sounds great right?
Frank Darabont (Shawshank Redemption) has brought Image Comics The Walking Dead to the little screen and after watching the first two episodes I am floored by how fantastic it is.
I may be getting ahead of myself here, but if they can maintain this level of quality we could be looking at the best zombie fiction since the early George Romero films that really put this genro on the map.
Perhaps most impressive is how polished the show looks on a TV budget. The makeup is incredible and scenes of an abandoned Atlanta look completely believable.
As The Sopranos revolutionized television a decade ago we are seeing something very similar now with Mad Men. Since it hit the scene the bar has really been raised for visual style and the quality of the sets for television shows. Shows like The Walking Dead and Boardwalk Empire look more like big budget movies than television shows.
If you like zombies, awesomeness, violence, or all of the above, I recommend giving The Walking Dead a whirl this Sunday on AMC. 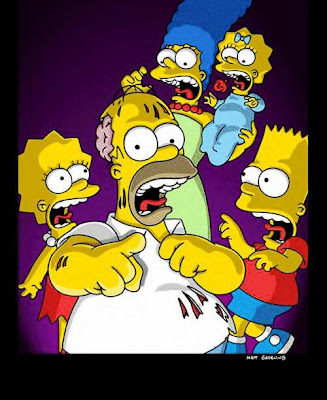 I am a sucker for holiday episodes of just about any show. It takes me back to the the days of watching Steve Young throwing the old pigskin around with Brandon Walsh on a brisk Southern California Thanksgiving morning.
But here is the thing, once the clock strikes midnight on said holiday I'm in full on Jay Z mode and On To The Next One (Sorry my editor says I need to attract a younger audience).

So what gives Murdock?? Who the fuck is excited for a Halloween episode on November 7th? In what world is this the best Fox can do? I know this is because of the World Series, but there has to be a better option here.

I am just spitballing here, but a quick check of the schedule shows that the lazy baseball players were not doing anything on October 29th. Further in depth investigation reveals this date is actually PRIOR to Halloween.

Also, please knock it off with the fucking robots when I am watching football. Seriously, enough is enough.
Posted by Ike Diamonds at 7:23 PM 0 comments 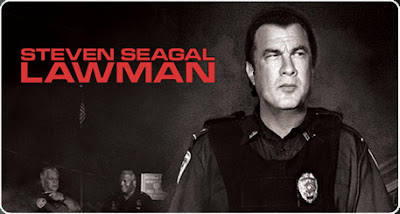 He also seems to be a killing machine. As far as I can tell from the show he trains the other police how to sharpshoot. Trains them in martial arts. And on top of all this he appears to be about 6'5 and at least 260 (that is probably being generous).
Throughout the show it is made abundantly clear that Seagal is a real cop. We have seen him go second and third through a door during drug busts. He jumps right into the fray when suspects become unruly. He is not fucking around.
Adding to the fun of the show is the ret of his team. For a bunch of cops these guys seem like a pretty funny group of guys. The ribbing is non-stop and even Seagal gets his share. Seagal even keeps it ghetto sometimes with quotes like, "If Lawrence don't eat something he's going to get a bitch slap".
I try to take these reality shows with a grain of salt. After all, I never want to be fooled again like I was in the Great Bobby Brown Debacle of '05 when I aqctually talked myself into thinking Bobby was a good guy that was just misunderstood. Its pretty amazing what editting your own reality show can do for your image.
But for now, I think I'll just go along for the ride and try and tell myself that Seagal is a great guy. Lots of great guys get sued for sexual harassment right?
Posted by Ike Diamonds at 4:09 AM 0 comments