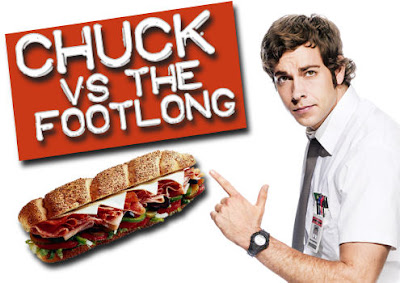 As more and more of the old people die off and the TV audience is comprised by more of us that are capable of pressing buttons clearly labeled "FF" and "Play" networks are increasingly forced to lean on product placement for revenue. Somehow this is a real hot button issue for some of you, allow me to enlighten you.

Television is first and foremost a business. Why did your favorite show get canceled? It was not getting the ratings necessary to sell commercials. Why does CBS make the most money? They pulled off a Walmart and targeted old and poor people to sell to the masses. Does it suck? YES. Does it make money? Absolutely.

Now as the DVR proliferates to more and more households there are two options here. Cable companies can either "brain damage" your DVR programming you to watch commercials even when you want to fast forward to a specific scene in a show much like Hulu. OR you can climb down off your crucifix and calmly watch Chuck eat a footlong Subway sandwich every Monday.

I'm not sure why this bothers people to such a degree, I mean most shows include these shots with little fanfare or in some cases manage to handle it with an amusing wink and a nudge for the viewer.

You know what I hate? Soccer. You what I love? The way soccer handles advertising. One long product placement of an Adidas logo in the corner while the action continues uninterrupted. What a great idea! How about American TV follows this example and I can stop staring at chinless Jared and just hope Big Mike doesn't order a Veggie Delight on this weeks episode of Chuck.

What Shall I Watch Next?

I'm running out of shows! This is where you come in. Let me know what I should watch next! If you have an idea not on my list just leave a comment for me. 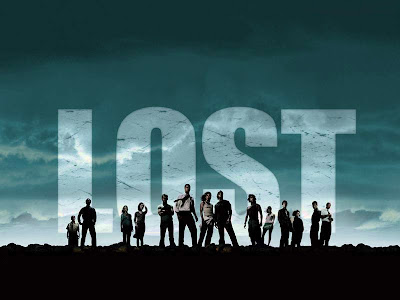 Ten months have passed and I find myself missing Lost more with each passing month. No show seems capable of stepping up and filling the void left by Lost. FlashForward seemed promising but then it was axed after a mere season (despite me taking it to the streets in the protest you can read about here. The Event is certainly no Lost replacement despite its clear desire to take up the mantle.

Perhaps Fringe is the closest, but as much as I love Fringe it is just not the same. Great show, but it will always be my X-Files replacement, and that is fine. But I still want more Lost. Lost was so much "bigger" than other shows. Anything could happen, the laws of reality were thrown out the window. Was it a dream? Hurley's insane minds very own construct. A Wormhole? Were they on Atlantis? An artificial reality induced by our new alien overlords who live on pot roast and rat tails?! Who knew, anything was possible. What a fun ride that was.

In sports we've been looking for the "next" Jordan for over a decade now. I suspect we're in for a similarly disappointing string of charlatans while we wait for Lost's successor as well.
Posted by Ike Diamonds at 6:34 AM 1 comments 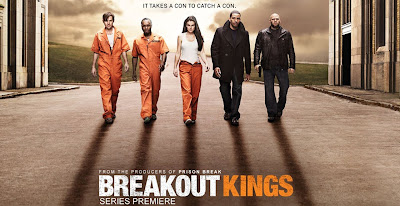 Despite the fact that A & E canceled Rubicon I have decided to give them another chance. After all, its not their fault that our country is populated by a bunch of dipshits who like to watch complete strangers lose weight on a reality show for entertainment. Seriously guys, take a look in the mirror and figure out what the fuck is going on with yourselves.

Thankfully my magnanimous nature was rewarded with a pretty damn entertaining show. The premise is two US Marshals take a group of handpicked convicts out in the field to help track down escaped fugitives. For each fugitive captured the cons get a month off of their sentence. Now this is admittedly a little far-fetched, but then again I watched Lost so who am I to nitpick? Trust me, its better than it sounds.

Our Marshals Charlie Duchamp and Ray Zancanelli, played by Laz Alonso and Domenick Lombardozzi (holy shit, I spelled that right the first time!), don't see eye to eye at all. Charlie's lack of field experience chafes with Ray who has to take orders from him. Each Marshal harbors some pretty serious secrets which will make for great stories down the line.

The convicts involved seem to be in a state of flux. Throughout the first two episodes two have already been sent back to the slammer. The standout convict is clearly Lloyd Lowery as played by Jimmi Simpson (You'll recognize him as one of the McPoyle's on Always Sunny In Philadelphia). He plays a former child prodigy with an IQ of 210. He is pretty much here to solve basically everything while the other people yell at each other. Malcolm Goodwin plays former drug dealer Sean "Shea" Daniels. He has a great chemistry with Jimmi Simpson and I think this pair could really hit their stride together before too long.

After two episodes this show has been a lot of fun. Domenick Lombardozzi is always fun to watch, and it will be nice to see him playing a character that isn't a total blockhead like Herc. Every character on this show seems to have a lot of layers we've yet to peel into and I'm looking forward to the ride.

How I Won The Only Oscar That Mattered

Every year there is one person you can count on to win at The Oscars: Me. I have done this 35 years running now. How you ask?

Simple:
If The Oscars are on ABC, my TV is on anything but ABC.
You see, its that simple. The funniest thing every year on The Oscars wouldnt make the cut as an SNL sketch. The list of winners is:

A) Completely unimportant. Its not a high jump, these are subjective ratings.

B) Completely incorrect. (Contradicts my subjective argument but fuck it)

C) Usually stacked with arty crap so everyone gets to pretend they have class. Sorry to say, we still all spent ten times as much watching Jackass 3 than the Kings Speech. We arent classy.

When someone asks who won Best Film, the correct answer is "I dont know, whatever Ike was watching while we suffered through this shit." 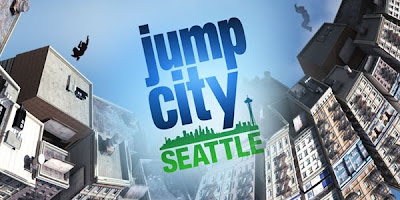 If you are looking for something absolutely off the wall for your television viewing pleasure I present to you Jump City: Seattle. Jump City is a weekly Parkour competition on G4 featuring some amazing athleticism and overall insanity.

If you aren't familiar with Parkour more than likely you've already seen it in movies like Casino Royale (the excellent opening scene). Parkour is a French discipline that emphasizes efficient and and fast movement through an urban environment. Jump City's competitions feature two rounds. The first round is purely speed based over a given course. The second emphasizes style giving each competitor a given amount of time to "freestyle" through the terrain.

While the racing is somewhat compelling, the freestyling is where the show gets interesting. The athletes are jumping and flipping in ways you wouldn't think the human body was capable. Parkour takes a unique combination of balance, strength, speed and balls. All of these jumps and flips are done on concrete terrain, making this sport no stranger to broken bones and road rash.

As an added bonus Seattle serves as a beautiful backdreop for the show. if you come from a shithole like portland you can see what a real city looks like.